You've created a new image, captured it and attempted deployment and received the error:

"Windows could not parse or process unattend answer file [C:\windows\Panther\unattend.xml] for pass [specialize]. A component or setting specified in the answer file does not exist."

Alternatively, you've just made a new MDT Task Sequence and slipstreamed updates into it and received the same error.

The cause of this is simple, it's internet explorer 10.0 which you have installed either within the image or slipstreamed into the image.

Actually simple, but only if you know where to look and since you've probably scrolled down and ignored everything I said above, I'll get to the point, follow these instructions: 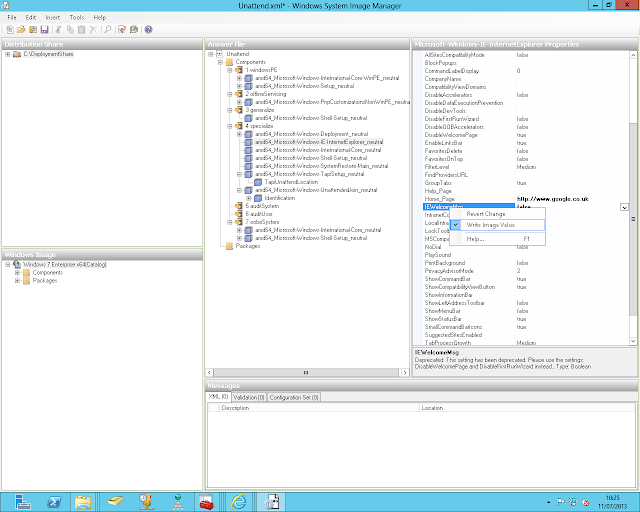 11. Save the Unattend.xml and to be on the safe side update your deployment share (though I don't believe this is needed but it makes you feel better inside)
Reinstall your image onto your client and it should work fine for you now :D

Having spoken with some of my colleagues I have ascertained that by using MDT 2013 they have not encountered this issue, however if you need to maintain support to deploy Windows XP images then you will not be able to upgrade.
Posted by D. Evans at 10:32

Please enter your comment here, all comments are subject to moderation

If you are not happy with this then unfortunately your only option is to leave the site as it is hosted on Google's Blogger.