We have been building a large number of Dell Latitude E5410 and E5420 laptops using an MDT task sequence to install Win XP. The task sequence does not use a wim file for xp but is effectively the same as running a RIS style setup process.

We downloaded the driver pack which Dell make available for the E5420, in theory this contains all drivers needed in a single cab file, however we encountered an issue in that during setup the installation WMI either got corrupted or failed to install. Since MDT needs to use WMI in order to run this left us with a partly installed XP machine which fails to complete the task sequence. This issue did not present itself when we ran a test build with Windows 7.

As part of our troubleshooting we manually downloaded the drivers individually and added them to MDT, we missed the ST Microelectronics Freefall sensor as it was wrapped up in an installshield exe file but the task sequence completed succesfully. Helpfully Dell included a readme with the exe file which explained that we could run the setup.exe with the /s switch and this would allow a silent install with no reboot when done.

Using this information we imported the setup file into the MDT Deploymentshare as an application then added it near the end of the task sequence. In order to not need an extra task sequence just for the laptops we edited the options for the application installation step and added the filtering options to only apply if true and used a WMI query to test for the model type. The WMI query used is as follows

WQL Query : Select * from Win32_ComputerSystemProduct WHERE Name LIKE "%Latitude E54%" 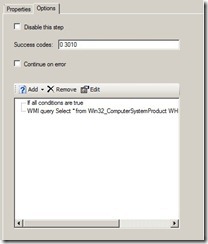 Using these settings will allow the installation of Windows to complete leaving you with a fully working WMI installation and all of the drivers to give you a nice clean Device Manager.

Please enter your comment here, all comments are subject to moderation

If you are not happy with this then unfortunately your only option is to leave the site as it is hosted on Google's Blogger.